“We try to do as much as we can, especially as we have rid ourselves of any debt,” he said. “We've always tithed. That's something that we always have been taught, but we've also been taught that that's not giving. Giving is above what we owe God, and that is our tithes.” 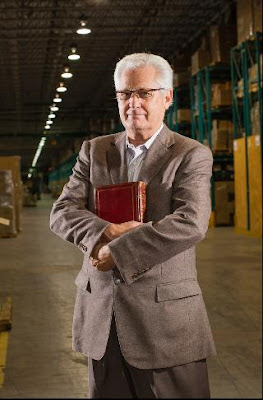 We aplogise for not following up on this series; in the last 2 years, we have shared the story of three God made billionaires; we started with John D. Rockefeller, Folorunsho Alakija and  Jin Sook and Do Wong Chang.

Today we will continue with the story of David Green who is the 86th richest man in the United States and 246th richest man in the world. David Green is remarkable and inspiring; he has done phenomenal work for the Kingdom of God. It was him God used to bail out Oral Roberts University by awarding $70 million dollars and restructuring the board, he is also the major investor behind the YouVersion bible app amongst many others.

David Green is 73 years old and he is the founder and CEO of Hobby Lobby; an organisation that retails miniature picture frames amongst other art and craft antiques. David Green started the business from his garage in 1970 and today it has grown to be one of the biggest with 680 stores in the world.
David Green comes from a family of preachers and he recollects the memory of his parents’ putting their last dime on the collection plate. His father was a small-time Assemblies of God preacher who bounced from one tiny congregation to another, eventually landing at a church of just 35 attendees in Altus, Oklahoma. The family subsisted on hand-me-down clothes and food donations from the congregation, going weeks without having meat to put on the table but that didn’t stop Green’s mother from donating to the church. Barbara Green, David’s wife of 51 years, Barbara, recalls her mother-in-law with reverence. “David’s mother gave out of her need. She would give stuff when she might not have something to replace that with, yet she stepped out in faith.”

David Green is described by Forbes magazine as “the largest evangelical benefactor in the world”, and says that his entire $5.1 billion (£3 billion) empire belongs to God. Mr. Green has been known to say; “We're Christians, and we run our business on Christian principles.”
In his words, “If you have anything or if I have anything, it’s because it’s been given to us by our Creator, so I have learned to say, look, this is yours, God. It’s all yours. I’m going to give it to you. I don’t care if you’re in business or out of business, God owns it. How do I separate it? Well, it’s God’s in church and it’s mine here? I have purpose in church, but I don’t have purpose over here? You can’t have a belief system on Sunday and not live it the other six days.” All 680 Hobby Lobby stores close on Sunday.

Hobby Lobby takes half of total pretax earnings and plunges it directly into a portfolio of evangelical ministries. Green keeps the total amount of his charitable contributions private, but based on information received from him and discussion with various recipients, FORBES estimates his lifetime giving at upwards of $500 million.

In the U.S. Green’s wealth produces the physical underpinnings of dozens of churches and Christian universities. It began in 1999, with a former hospital building in Little Rock, Ark. that he purchased for $600,000 and converted into a church. Green has since spent over $300 million donating about 50 properties. He also supported Rick Warren by letting him use his Saddleback Church a 170-acre ranch property as a retreat.

Mr. Green’s gave a former Ericsson plant in Lynchburg, Va., which he bought for $10.5 million, to Jerry Falwell’s Liberty University in 2004. He gave an entire campus to Zion Bible College in Haverhill, Mass. in 2007, at a cost of $16.5 million. In 2009 Green snapped up the 217-acre former campus of Massachusetts prep school Northfield Mount Hermon for just $100,000, spent $9 million on renovations and plans to give it away.

Mr. Green has taken God’s word digital. He sponsors the YouVersion Bible app for mobile phones, equipped to offer almost 300 different versions of Scripture in 144 languages–all available at the tap of your finger. It has already been downloaded more than 50 million times.

Abroad, Mr. Green is putting Scripture into the hands of nonbelievers. “People ask, ‘How are you going to get a Bible to everyone in the world?’ We’re doing it,” Green says. Through foundations he supports, he has already distributed nearly 1.4 billion copies of Gospel literature in more than 100 countries, mostly in Africa and Asia. The One Hope Foundation targets children age 4 to 14 with Scripture tailored to them, while Every Home for Christ sends evangelists with Bible booklets door-to-door in some of the poorest countries on Earth. “It’s not like you give them that but don’t give them food; you do both,” Green stresses. But the priority is clear: “If I die without food or without eternal salvation, I want to die without food.”

Mr. Green lives in southwest Oklahoma City with his wife Barbara, they have three children. One son, Mart Green, is the founder and CEO of Mardel Christian and Educational Supply and of Every Tribe Entertainment while his other son Steve Green is President of Hobby Lobby. His daughter, Darsee Lett, is Creative Director for the Hobby Lobby stores.

Perhaps his most personal mission yet is just gearing up. Mr. Green is creating a permanent, public home for his collection of handwritten scrolls, rare books and ancient cuneiform tablets the family has amassed over the decades. At 44,000 artifacts, it appears to be the largest private collection of biblical antiquities in the world. Some of the most precious pieces are currently housed in a modest temperature-controlled storage room in the Hobby Lobby warehouse. It’s not much bigger than your average walk-in closet, but Mr. Green steps lightly as he enters. He’s treading on sacred ground. “This isn’t just some book that someone made up,” Mr. Green says as he gingerly takes one Bible down from the shelf. “It’s God, its history, and we want to show that.” He purchased a building in Washington, D.C. with the hope of opening the Museum of the Bible, an expanded version of a current traveling exhibition, within three years.

Yet Green steadfastly believes that the success is not his doing. “I think God has blessed us because we have given,” he says. Take Green’s account of Hobby Lobby’s close call with death in 1985. On one hand, there’s the perfectly reasonable, Business 101 explanation: He overleveraged the business and diluted the inventory with off-brand, expensive products like luggage, ceiling fans and gourmet foods. Then there’s Green’s explanation: “It was a pride problem, and I had to get rid of it,” he says, describing his leadership style. “It’s sort of like God says to me, because I was arrogant, ‘I’m going to let you have it by yourself.’ ” The Business 101 answer was downsizing, cost-cutting and pleading with creditors. The Green explanation: getting under his desk to pray for help. Whichever version is right, smart strategy or faith, combined with hard work, brought back profits.

Stores are closed on Sundays, forgoing revenue to give employees time to worship. The company keeps four chaplains on the payroll and offers a free health clinic for staff at the headquarters–although not for everything; it’s suing the federal government to stop the mandate to cover emergency contraception through health insurance. Green has raised the minimum wage for full-time employees a dollar each year since 2009–bringing it up to $13 an hour–and doesn’t expect to slow down. From his perspective, it’s only natural: “ God tells us to go forth into the world and teach the Gospel to every creature. He doesn’t say skim from your employees to do that.”

No matter how big Hobby Lobby becomes–Green is adding 35 stores this year, with a long-term goal of surpassing 1,000–its founder wants to make sure the company remains faithful long after he’s gone. So far, Hobby Lobby has been a traditional family operation: All three of Green’s children, Steve and Mart, plus daughter Darsee, are executives, and several of his grandchildren have already joined the company.

The ownership has been structured for the company to continue indefinitely, but in the event of a sale or dissolution of Hobby Lobby, 90% of the company will go to ministry work while the remaining 10% will be shuttled into a trust reserved for the education and health of family members. “My grandkids can’t say, ‘I own 5% and I own 10,’ and then all of a sudden they’re sitting on a yacht,” says Green, who, despite enough wealth for a fleet of Gulfstreams, still flies coach.

References; wikipedia.com; forbes.com; chritiannews.net
Posted by Unknown at 5:26 AM